I’ve been interested in learning more about Hildegard of Bingen — a mystic, healer, composer, and abbess of several monasteries in 12th Century Germany — for many years, going back to the time more than a decade ago, when I heard that she used to drape sheets over flowers saturated with morning dew in order to then lay the healing essence-imbued sheets upon people who were ill. Because of a project I’m working on, I felt compelled to do so now — this is the time. I will be spending July immersed in Hildegard’s world of the Middle Ages. 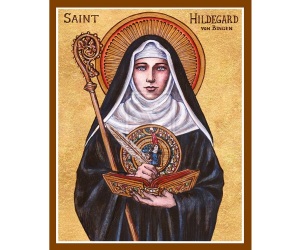 Hildegard received visions from the Divine and was instructed to write them down and share them. For instance, she wrote the following about one of her visions:

“I heard a voice speaking to me: ‘The young woman whom you see is Love. She has her tent in eternity… It was Love which was the source of this creation in the beginning when God said: ‘Let it be!’ And it was. As though in the blinking of an eye, the whole creation was formed through love. The young woman is radiant in such a clear, lightning-like brilliance of countenance that you can’t fully look at her… She holds the sun and moon in her right hand and embraces them tenderly… The whole of creation calls this maiden ‘Lady.’ For it was from her that all of creation proceeded, since Love was the first. She made everything… Love was in eternity and brought forth, in the beginning of all holiness, all creatures without any admixture of evil. Adam and Eve, as well were produced by love from the pure nature of the Earth.”

There is much about Hildegard to admire, and to recognize that prior to the Reformation, Christian Divinity was viewed quite differently than it is now. Hildegard had a deeply relational experience of the Divine as spiritual experience, which included a profound connection to the sacredness of Mother Earth, as described here when she transcribed a voice speaking to her:

“I am the one whose praise echoes on high. / I adorn all the earth. / I am the breeze that nurtures all things green. / I encourage blossoms to flourish with ripening fruits. / I am led by the spirit to feed the purest streams. / I am the rain coming from the dew / that causes the grasses to laugh with the joy of life. / I call forth tears, the aroma of holy work. / I am the yearning for good.”

Hildegard speaks often of the “web of creation” and an intense “power of greening” and says that:

“It is written: ‘The Spirit of the Lord fills the Earth.’ This means that no creature, whether visible or invisible, lacks a spiritual life.”

I look forward to getting to know the unique woman who was Hildegard of Bingen.

Thank you for sharing. Cancel reply